Workshop Service Design at The Drechtsteden

The Drechtsteden, a Dutch region near the city of Dordrecht, offers a favorable business climate for high-tech companies. To stimulate innovation six different organizations are working on sharing knowledge and innovation, training and subsidy options. But how do you bundle these forces in a smart way and prevent all six of them from reinventing the wheel? In three workshops, Bizzomate succeeded in laying the foundation for optimal and efficient cooperation.

These six organizations don’t have an easy task, says Menno Bijnagte, acquisitions manager at Deal Drecht Cities, the regional marketing and promotion agency of the Drechtsteden. As recorded in the growth agenda, the region is eager to develop as a smart industry region. Menno: “How can we become a high-tech region? Many organizations are working on this goal, but their roles in the process aren’t clear. We called in Bizzomate to ensure we achieve better coordination and to reach more efficient cooperation.”

Innovation funds are hard to find

Research by Berenschot, carried out to map the state of the business climate in the region, showed that visibility of the business opportunities should improve drastically. The organizations weren’t clear in showing what they do, and for whom. Besides that, the research also shows that companies in the region can’t get access to the available funding for innovation.

Menno: “Innovation, for example, suffered from a wait-and-see attitude. Better cooperation between the organizations and the companies involved should make innovation more proactive.”

First and most important step: getting to know each other

To allow the organizations to work together better, Bizzomate – based in Dordrecht – initiated three interactive Business Design sessions. Workshop leaders Anne van der Heide and Dennis Brouw first introduced the parties in an unconventional way, so the participants got to know each other in an unorthodox way. “We decided to use Picture Start,” says Anne van der Heide. “You don’t simply tell who you are and what you do, but you’re invited to tell a story based on photos. Each participant chooses a photo – from jet fighter to African tribe – and talks about his relationship with that photo. This way, participants will discover unknown sides of a person.”

The sessions had to take place online, due to the corona measures, so Bizzomate introduced an online whiteboard to draw different canvases. All participants were able to contribute from home. 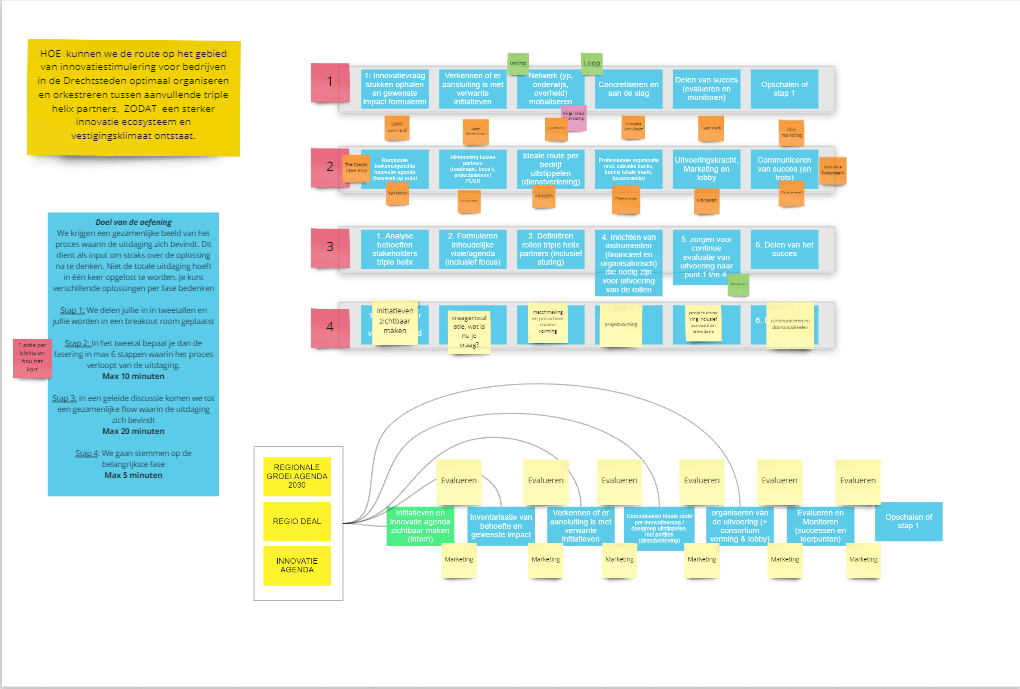 Image: example of an online exercise (in Dutch)

The challenges for the participants were formulated in different work forms – like working in pairs, or in the group. It took a session and a half to really sharpen the challenge, but the eureka-moment followed immediately. Anne: “It started as a loose exercise, but I wasn’t yet convinced that we could tackle the named challenges. My hunch said that collaboration didn’t kick off because every organization tried to do too many tasks.”

The hunch turned out to be correct. The participants did an exercise in which they had to drag their own logo to the phases in the chain in which they belonged. Everyone dragged their logo to all stages. The online canvas showed pure chaos, and all participants fell silent. Anne: “Now we have tackled the problem, I thought happily. But the chaos on the screen made everyone think the assignment had failed. But the opposite had happened; the problem became visible in one blow.”

“We thought everyone knew who we are”

Menno recognizes the situation. All organizations thought they knew their role, until chaos popped up. Their strengths turned out to be the weaknesses. “We were competing with each other. Companies that want to settle in the region do not know the right organization to turn to. Every organization has the right intention of helping companies. They all thought they were clear about their services, but obviously they were not. By making it visual, the issues became visible.”

With this in mind, the third meeting could be set up as a brainstorming session: All the different tasks of the organizations were put in a matrix, which contained all tasks and phases. Some tasks turned out to be overrepresented, while others lacked the proper occupation. The matrix turned out to be a perfect tool to show the weak spots in the process.

The brainstorm sessions provided Deal Drecht Citiessix with six concrete ideas. Menno: “We have defined everyone’s role in the innovation route. As the discussions progressed, it became apparent, for example, that not every organization is equally strong in a certain area. We understand each other much better now and we learned about everybody’s qualities. The business process became faster and more efficient and we can actually help companies move forward now.”

“During the sessions it soon became apparent that not everyone approaches business issues the same way. We engaged in some conflicts of interests. Bizzomate is very capable of taking all parties seriously in a pleasant way, with respect for everyone’s interests.

They made sure that everybody left the sessions with new insights.

Our intention is to achieve a stronger ecosystem and a more favorable business climate. We realized that things had to be done differently, and Bizzomate showed us the right way. ”

Check out our cases page for more interesting customer stories.

Why backend systems don’t have to be a showstopper for innovation. Break loose with bimodal IT

Why backend systems don’t have to be a showstopper for innovation. Break loose with bimodal IT